The author of this site is a classic example of turning lemons into lemonade.
The son of a Baptist minister and growing up in upstate New York in the 1950s, Gary Edwards wasn't a candidate for the football team, nor salutatorian of his high school class in Corning.
He did have a hunger for competition and the want to play major league baseball but his slight physical build, lack of speed and strength meant that was never a possibility. When a brief trip through electronics school in the Air Force ended in failure, he was given the option to become a photographer and the rest, at least at the personal level, is history.
His journey from the 4 X 5 Speed Graphic he was taught to use at the Shaw Air Force 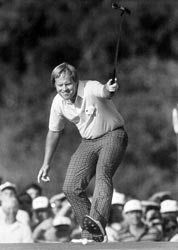 Base Photo Lab in 1959 to his being nominated for a Pulitzer Prize in 1986 for a photograph taken of Jack Nicklaus winning the Masters Golf Tournament was just another step in a career marked with, "good luck creating opportunity."
The fact he took advantage of the many opportunities along the way allows Edwards to tell young people just beginning their journey how they can prepare themselves for their own opportunities.
"There are," he loves to tell them, "only a few opportunities in life so be ready to take advantage of them when they arrive."
By the time he left the Air Force in 1962 he was already in love with photography and within a year he was on the staff of his hometown newspaper, being taught to write by his mentor of that time, Richard Peer.
"To succeed at anything, it helps if one has a mentor and Dick was mine at that time in my life," Edwards says. There would be others along the way. Very few among us become successful without help from someone else, he says, "So remember to treat others with respect at every step of your journey." 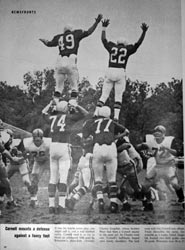 His three year stint at the local newspaper provided an opportunity to photograph Cornell University football for United Press International and it was at one of their games in the fall of 1965 that a field goal kicker by the name of Charlie Gogolak made a 54-yard field goal, setting a college record. The important part and the luck of the moment was Cornell's standing their defensive backs on the shoulders of the defensive tackles, also standing up, in an attempt to block the kick. As the ball cleared the fingertips of the two-tiered defenders, Edwards shot one frame from more than 60 yards away and when it ran on the UPI wire, Life Magazine contacted Edwards and they printed it full page, grain and all, (Page 48, Oct. 22, 1965) and it didn't matter to Edwards that they cropped the football out of the picture.
"It was luck," he tells anyone who listens. "If he'd have missed the field goal I might not have transmitted the picture at all and who knows where my career would have gone from there."
That picture led to a 25 year career with UPI that started in Buffalo, N.Y. and went on to stops in Rochester, N.Y. and Philadelphia before making his final transfer, to Dallas in 1969.
Along the way and with the encouragement of another mentor, UPI Photo Editor Larry DeSantis, Edwards pioneered the use of longer lenses to cover NBA basketball. While other photographers sat at the end line of the court waiting for the action to come to them, he used a 300mm 4.5 lens to photograph the action at the far end of the court. In his one and only year in Philadelphia his photograph taken with the 300mm lens placed second in the statewide photo competition.
And his career continued to thrive as he moved to Dallas. Over the years in Dallas he would cover three Olympics, eight Masters Golf Tournaments, 14 Super Bowls, World Series, and numerous NCAA athletic championships in a variety of sports.
In his career he has photographed the very best in their sport, from a retired Mickey Mantle trying to play golf and Wilt Chamberlain battling with Bill Russell in the NBA Finals to Rod Laver, John McEnroe, Bjorn Borg and Jimmy Conner in tennis.
He remains an award winning photographer who remembers clearly that luck and good fortune are a part of the experience.
How he and others at the very top of the food chain of news and sports photography accomplish what they do, will be discussed in another section of East Texas Reflections.
Edwards now lives in the quiet of the Piney Woods of East Texas, his adopted home, where he remains a fulltime journalist in a less hectic atmosphere at the Mineola Monitor in Mineola, Texas.
He is married to the love of his life, Debbie, and between them they have five children and a growing number of grandchildren.
It is his hope that in the classroom section of this website (to be added in the near future), titled from Speed Graphics to Digital, that he will be able to help some aspiring photographers become passionately connected to the art form he made his career.
East Texas Reflections is intended to be a living and growing project so we hope you'll enjoy visiting us over and over again 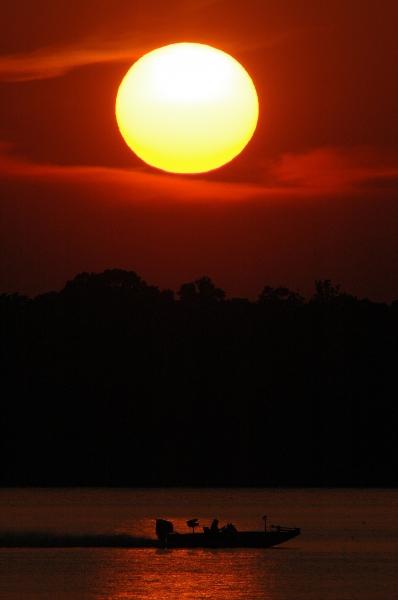